Nininger Moment #28 A Brief History About The Man 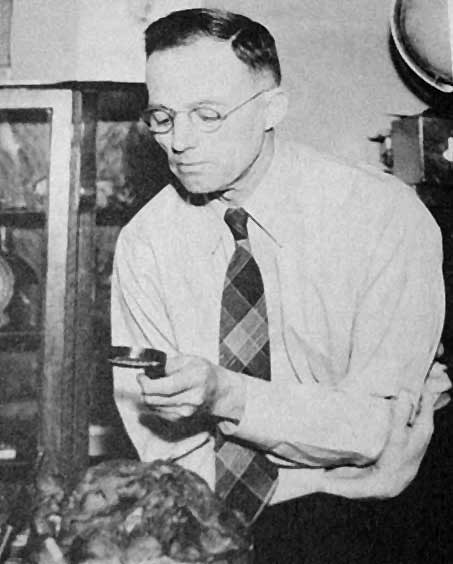 Apply your mind to at least one problem which has never been solved, which in general is considered impossible of solution, but which, being solved would benefit humanity. Do with your life something that has never been done, but which you feel needs doing.

From the time of Peter Pallas, Ernst Chladni, Edward Howard and Jean Baptiste Biot only a few meteorite finds and falls ever went noticed. In the 130 years after the acceptance of meteorites the only meteorites that were found were the ones from witnessed falls or that were obvious finds. Falls had to practically land in the laps of scientists before any notice of such events were cataloged. Often geologists would say meteorites are related to the field of astronomy and astronomers would say that they should be in the science of geology. Neither side would claim the science. A man with an idea of how to effectively find meteorites would soon show the rest of the world how it is done and begin the science of meteorites.

Harvey Nininger a biology professor from McPherson College in Kansas who also taught Geology, would witness an event that would set the stage for the rest of his life. On November 9th, 1923 he witnessed with others a brilliant fireball and wondered if a meteorite had fallen like he had read in literature of that time. He began a long road to educate himself on meteorites. There was very little in the way of information about meteorites in that time. Nininger found a copy of of Farrington’s “Catalog of Meteorites of North America” which would further inspire him to hunt.

Nininger realized from 1803 to his present time that only about fifty falls or finds had been recorded or about one in two years. He felt that if some sort of program to instruct people who worked on farms and ranches were made that more meteorite specimens would become known. By going out hunting and telling people how to find meteorites, then giving rewards for any finds, Nininger had found several meteorites by using this approach. He concluded correctly that meteorites were more plentiful than thought.

In 1928 Nininger outlined his idea of a field program for locating and preserving meteorites to Dr. Merrill of the Smithsonian. Suggesting that such a program would provide meteorites for the great museum. Nininger spoke at great length to Merrill but was told that if such a program were funded well, that it would take the rest of Nininger’s life to find a single specimen. Nininger told him that he didn’t know how but he would proceed some way with his program and the next time he saw him, he would have a new meteorite to sell to him. Merrill amusing laughed and they shook hands. The next time they met, Nininger had two specimens to sell him and both were bought!

Because Harvey Nininger couldn’t convince the main stream scientific community in the United States to invest in his idea of finding meteorites, he figured out a way to generate a program on his own. One of the ways he paid for his program was to sell a number of his finds and to make trades with museums. He generated his own collection (the largest private collection in the world) as well as a selling collection to pay for his efforts.

Nininger’s program was this, talk to locals about meteorites and how to find them, pass out leaflets that told the same. Show actual specimens to people he had with him. Give lectures on meteorites at high schools, colleges and other places of assembly of people. Offer rewards by buying specimens for any specimens found. He would always go back to the areas a few months later to see if anyone had found a new specimen. He also talked to many farm houses, ranches and anyone who would listen to his fascinating topic of meteorites.

In a 35 year time span, Nininger brought to light over 226 previously unknown falls, that added up to over 2,000 individual meteorites during this time frame of hunting. No doubt that many other new falls were found as an indirect result of his program to other institutions, collectors and scientists. A Dr. Flecter Watson of Harvard once wrote in his book ” Between The Planets” Published in 1941 that Nininger was accounting for half of all the discoveries in the world at that time. In 1937 thirty one new discoveries were tabulated to have been found due to Nininger’s efforts. More than three times the amount found in any three years previous for the entire world. Nininger figured he had published over 150 different papers, four books and two booklets and passed out over 200,000 free leaflets in his effort to bring about new meteorite finds and information.

Harvey Nininger is considered the father of American Meteorites. Harvey Nininger and his wife Addie started what is now the Meteortical Society. Nininger’s gifted and entertaining ability to get ordinary people interested in finding meteorites brought about many new finds and falls.