Paul and Alan drove up at about 5:45 AM and we headed off for Tonopah, Nevada. It was great to see Alan. He moved up to Washington state a number of years ago and we had only seen him a few times over the years since. We had hunted with him many time before he moved.

The weather was supposed to be in the 80’s and that would be great for hunting. We had thought about going to the desert down nearer home but the expectation for the Eastern Mohave was temperatures over 100 degrees and that was not sounding good to us. I had not been to that part of Nevada since metal detecting in ghost towns about thirty years ago. So I was looking forward to revisiting the area.

We arrived mid afternoon at the dry lake and we were quickly out on the lake bed with magnet canes hunting. It was a little deceptive as we drove toward the lake. It did not look very large but once we arrived we could see it was a vast surface. It did not take long hunting to see that it was different than lake beds nearer to home. There was simply nothing in the way of trash on this lake. Being a sucker for bullets and other stuff. I came home with only two bullets and one shell casing after three days of hunting. 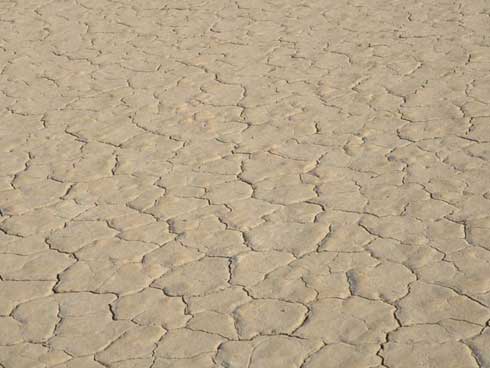 Paul brought his telescope to observe the sky at night but the wind was picking up as the afternoon went on and it was really howling by sundown. It did not stop as it often does as the evening progresses. So we scrubbed the astronomy for Thursday night. We sat around and told tells and relaxed in the motor home until late. We had our normal breakfast of cereal and stocked up on liquids for the morning hunt. Generous applications of sunblock and we were out the door to start hunting. We moved down the south side of the lake and it was not very long until I saw a fragment of meteorite on the very edge of the wave washed shore. It was an area where there were some rocks but distinctly less than where there had been no wave activity. But, it was where there were many more rocks than on the lake bed proper. It was a sorting area, where material from off the lake bed had been moved down onto it. There were piles of straw like vegetation strewn across this zone that had been concentrated by the waves also. The vegetation was left behind like a sort of mat when the water evaporated. I saw the brown stone and it was different in color than the black and dark gray rock that exclusively make up the rest of what was there. 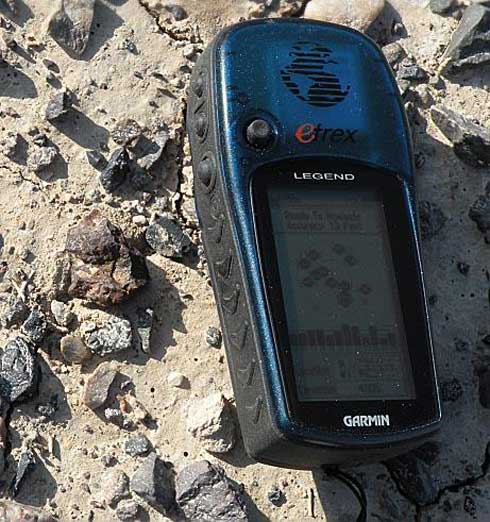 I took my photos and GPS readings after showing the fragment to Paul and Alan. Then I went on hunting the area. In just a few minutes I saw another smaller piece. One more a little later was even smaller and I showed it to Alan before pulling it out. I did not hunt anywhere else that morning but that small area. It took about two hours before I found just one more piece making the total of four small pieces. They are very weathered. They have not been on the lake long.  They look as if they have cracked apart from a mass off the lake bed and washed to the edge recently. They do not fit together which would have been very cool. But, my finds seem to always be old and ugly.

The wind was down in the evening on Friday and Paul set up his scope. We looked at a host of objects and saw a couple spectacular fireballs from the small shower that was going on at the time. It was remarkably dark and clear. Paul’s telescope has fabulous optics and the contrast in familiar galaxies was the best I have every seen. M51 the so called Whirlpool Galaxy was amazing. We looked at planetary nebulas, globular clusters and Saturn edge on is always very cool. I was beat after my week at work and not good sleep the night before so I turned in a little early to relax in the darken motor home until the rest finished The evening was not cold and I had not even put on a coat. What a great ending to a great day.

Saturday morning the three of us headed down to western end of the lake to hunt. After a couple hours we moved across the lake to the north side where the erosion is quite different to try our luck there. That is the area where the few man-made objects that we found had been found the first afternoon. It looked like the most deflated part of the lake bed. Scattered little islands of scrub brush stand up in this area. They look to be gradually disappearing as the rains wash away the dirt from around and under them. In just a couple minutes we began finding waste flakes of obsidian from tool making scattered where we had stopped the motor home. Great work Paul for picking such an interesting spot. Everything that had been dropped or fallen on the lake was still in place here. I found a broken glass bottle that had purpled with age. So that made the spot it was at a hundred year old surface. And the waste flakes were certainly several hundred years old probably. My one fifty caliber bullet was found on the north side in similar terrain. I found the only shell casing a little while after the bottle. So I felt good that if a meteorite had fallen there it would be plateaued on the clay as these other object were. But, we had found no stones by around noon. We reassembled at the motor home for lunch and decided to make our way part way home that afternoon.

There were a good selection of desert animals on and around the lake. And I spooked up a couple big jack rabbits as I walked along. Once again we made it through without even the sight of a snake. 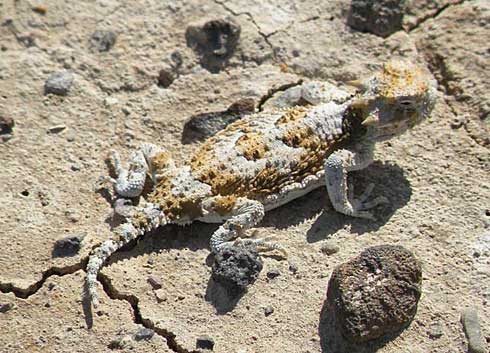 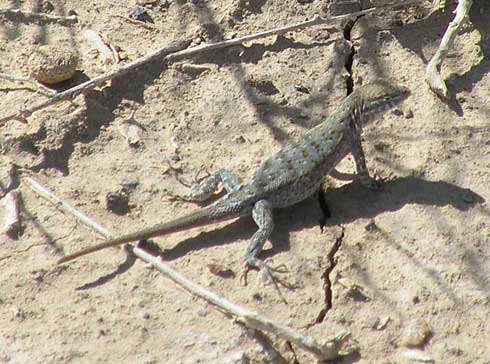 We intended to head south through Goldfield, Nevada where we would get some gas and save more than a hundred miles of driving by not going back up to Tonopah and across to Bishop. I said I would like to stop in Goldfield for a while and take some pictures of the old buildings and the mining area. I did not have a camera with me on the trip thirty years ago and it had been one of the spots I had metal detected. They were ok with that and we headed off. I used a Whites 6000/D back in those days. It was a good detector though not as easy to use as ones today. I still have it. Guess it will be an antique soon. What a great time we had poking around the town and workings. I took a lot of pictures of the old buildings in town. 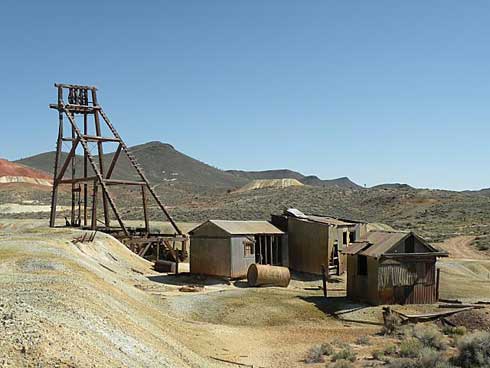 As I came around the corner of one of the structures there was a printing press sitting outside rusting and I let out a yell upon seeing it. I said, “That looks like the C&P that I used to run.” And sure enough when I walked up it was a Chandler and Price. Though the one I ran had been modified illegally into a handfed letterpress. It was the same size and style. I ran that press for small cards, numbering and blind embossing up until about 7 years ago when the company’s owner retired and we merged with another printing company. I ran hundreds of thousands of sheets through that press over nearly twenty years one sheet at a time feeding them in by hand. It is really something to see when a printer gets that rhythm going of placing a sheet and pushing it to the gauge pins while pulling off the last sheet . I miss that a little. 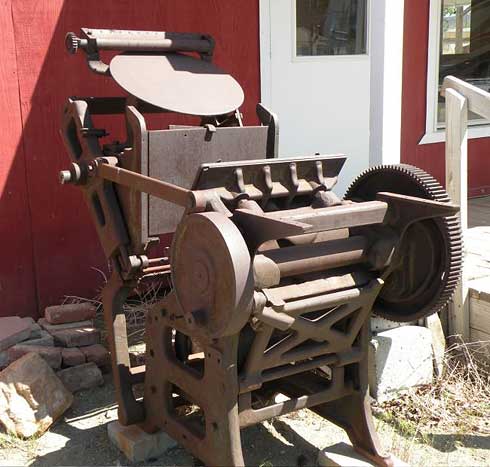 There was no gas station open on Saturday afternoon. So while I was off still exploring the guys made the decision to head back to Tonopah rather than risk getting low on gas going the other way. That was OK with me. Pizza and Beer was the next decision we made about dinner in Bishop. The only other thing to do was find a RV park to stay in that had showers. The pizza was great, the beer was a local microbrew that Alan picked and it was excellent. Another fine evening was started, and I was not the designated driver like in Tucson. We got our showers and feeling refreshed put Red Planet in the laptop and settled in for a movie. All the conveniences of home.

We slept in a little Sunday morning, eventually heading down the street to the Denny’s for breakfast. More good conversation and story telling. We were gradually catching up with what Alan had been doing for ten years in Washington. The RV park was next door to the Erick Schat’s bakery so we stopped there to get some of their famous breads to take home to the families.

Just one last stop on the way home at the Manzanar Relocation Center site for a visit to the museum and a drive of the auto tour and this vacation was over. But, what a great short vacation it had been. I don’t think I can wait thirty more years to revisit some of the sites along Highway 395. And there are a lot more ghost towns and dry lakes for us to still explore and hunt.

I weighed the fragments of meteorite I found and took two of the pieces to the garage to lap a little off flat sides. The largest piece lost 0.136 grams and now weighs 7.333 grams. Actually a lot less loss than if I had cut it. The other piece lost 0.128 grams and is now 3.534 grams. Both are about as weathered as you would expect for meteorites I found. Yet there was metal still in both one piece much more than the other. The ground mass is the same in appearance and there are chondrules that are not distinct. The chondrules are small and many. The metal grains in the one piece that still has most of its metal are small and numerous.

An H5 was found on the lake in the past and though I know nothing of its weathering state or appearance H5 is a good guess of these pieces as well.