Over the years we have hit this topic a few times, but I thought that it was about time to revisit Muong Nong Layered Tektites. I am sitting around a couple hundred kilos of the material all the time at home and yet don’t write about it much.

If tektites themselves are mysterious then the Muong Nong type glass is far more so. Not many individuals that study tektites doubt that the layered material has a common causal origin as the splashform type tektites. They are chemically very close and in color nearly identical. It is really just the layered structure, size and texture that distinguish the types. Splashform tektites never get large. Rare indeed is a splashform near a kilo. However, layered Indochinite tektites of over a kilo to several kilos are sort of commonplace.

The name says most of what is important about their structure. They are layered. It is not just the appearance of layering that shows in their chemically eroded surfaces. They are truly layered in their structure. Splashform tektites on the other hand are both structurally and chemically very homogeneous. Yes, they have internal flow patterns in the glass but not the striking clear to dark brown alternating bands of glass seen in Muong Nong. As for their structure Muong Nong masses will generally have many more bubbles then splashform tektites. Texture is another area that these glasses found regionally near each other show striking differences. Splashform tektites generally have a smooth surface marked by grooves and cup shaped pits with usually a rounded off overall appearance. Splashforms will often have the so-called bald spot. There are exceptions to this as in the Anda type where extreme etching has made them very rough and sharp in appearance. However, Muong Nong glass will usually not have the grooving or the cup shaped pits. It is often recovered as broken masses more or less block shaped. It has all the appearance of having been a larger mass that has been smashed and shattered into smaller pieces. Only on rare occasions with large mass of Muong Nong do you find rounded pieces. This is most probably because of shaping by normal abrasion, the same processes creating cobbles and boulders of many rock types. 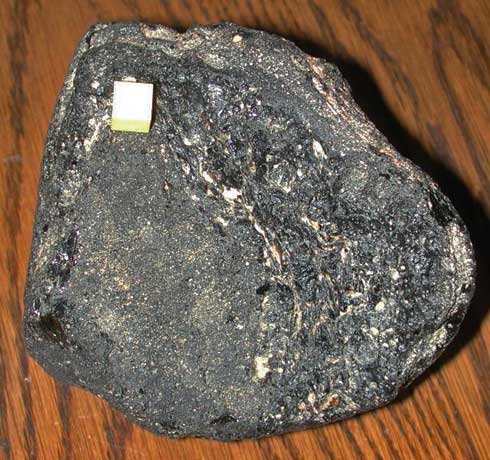 This is a beautiful specimen of Muong Nong with nice layering and a sculptured shape. It weighs in at 1339 grams. The scale cube is 1 cm.

One of the truly interesting surface features seen on Muong Nong glass is the cracking and crazing. To this writer it has always brought to mind the cracks in mud when it dries and I am convinced is formed by the cooling of the surface of the glass while the lower portion was still plastic. These specimens have a surface showing contraction cracking.

Many theories for the formation of layered tektite glass have been offered. I am only going to discuss the one that makes the most sense at the present to me. Simply stated Muong Nong layered glass forms near a large impact event through the pooling of liquid glass. Looking at the pieces themselves it is not that hard to visualize streams and small rivers of liquid glass flowing chaotically everywhere. One stream colliding with another, one flowing over another. Small pools filling and overflowing with the semi-liquid glass twisting bending, and rolling as it moves by gravity much like lava flows. 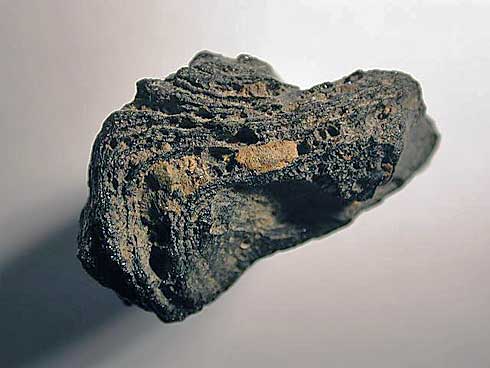 This small specimen of Muong Nong show a nice right angle fold and has been well etched to expose the layering.

The intricate folds and twists in Muong Nong tektites has permanently recorded for us a history of the motion the glass made while it was still plastic. The glass is twisted in many orientations within a single mass. This is the gross or coarse structure of the glass. However, there are always the individual layers of glass. These are fine microscopic layers. Often hundreds of them stack to form a single piece. This fine layering would seem to indicate accumulation from hundred of individual flows of very hot, low viscosity melt material. Each layer of tektite glass welding itself to the previous one, but with little or no mixing. Some flows were dark in color other fine flows were very clear glass. For me a reasonable imaginary vision of the event would be of shallows that fill with glass; layer by layer to eventually overflow. Alternatively, shallows whose earthen walls collapse-allowing outflow of the still molten glass.

The following pictures are of a thin section of Muong Nong that will show the banding and the great differences that occur from layer to layer. Very often there will be a layer that is composed of almost entirely bubbles and next to it layers that are nearly bubble free and of varying colors. 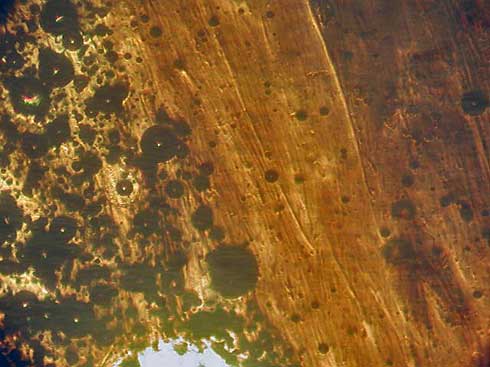 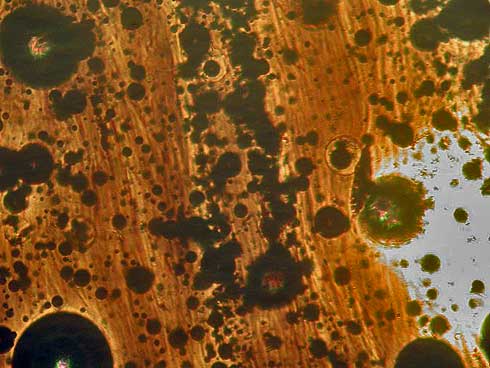 Direct conversion of soil into glass has been seen in many places. Libyan Desert Glass is a fine example of nearly pure silica glass that formed in an impact event. Perhaps in the form of an airburst explosion, though a crater has now been associated to LDG. Edoewie glass may be another example. Trinitite is a manmade atom bomb glass. Most impact glass is not as well melted as Muong Nong, with the exception of LDG. However, some crater glasses get pretty close to mimicking Muong Nong in form. Some pieces of the melt from the Zhamanshin crater are very glassy and folded like Muong Nong. Thinking of impact glasses as a continuum of quality has proven to be a useful concept for me. At the top of the continuum of quality is splashform glass then perhaps Muong Nong and glasses like Darwin Glass. Down further might be Zhamanshin glass and maybe the bombs of Ries Crater. With the really poorly vitrified glass of Meteor Crater at the bottom. Just an idea that is helpful to me, since it seems the impact process itself is always sort of the same. Big thing hits Earth really hard – melts rock – creatures die. 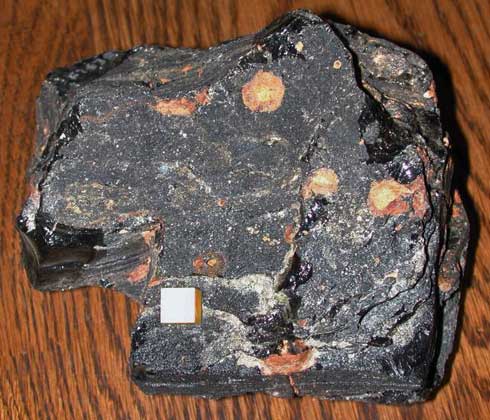 This 1510 gram Muong Nong is very similar in appearance to some pieces of the black Zhamanshinite. For Muong Nong this is not as well melted and there is a very large difference in color from pale yellow bands of glass to black. However the black of this piece has much less luster than most tektite glass. It has almost a matt sheen rather than being bright and shiny.

In my many discussions with Darryl Futrell, he always spoke of welded or unwelded micro tektites that formed the layers in the Muong Nong. For the life of me, I could never see the residual structures he called micro tektites. They looked like layers to me. However, when tektites were believed to originate on the Moon micro tektites were thought to be glass particles spit out by the billions from volcanic vents on the Moon. Tremendous masses of glass eventually formed. To use Darryl’s words “Rhyolite Mountains” formed that were later blasted form the lunar surface to Earth by huge eruptions or impact events.

Today few people still hold to the lunar origin of tektites. I did once, long ago myself. Today, most of the questions are answered by impact events on Earth. Many questions remain though as to the details of what happens. Exactly how Muong Nong got its layered form may still need some work, but I personally do not think we have to go to the Moon for an answer. The real remaining problem for me involves why only a handful of times have impacts occurred that created tektites while we have 170 + craters sites. I know the arguments and all the scenarios for making tektites. Some are better than others are. I think I would rather have the debate than to go through a tektite forming impact and have that disaster solve the problem.

I have discussed Muong Nong as if it was only a glass type found in the Australasian strewnfield. Actually, a few pieces of “Layered Muong Nong Type” glass have been found in most of the tektite areas of the Earth. They are rare elsewhere, but the processes that form them seem to occur along with most tektite forming impacts.