“Store Closed Gone Hunting” was sort of the theme we began with on Monday evening. The weather was looking more ominous but we knew from the past,that what happens on our side of the mountains is very different from what happens in the desert. We needed a place to stay the first night so we picked a place Paul had ridden motorcycles. Which as it turned out was only a couple miles from one of my haunts for shooting.

We had decided to give Lucerne Dry Lake a look even though it has been extensively hunted and yielded few and very small meteorites. The total in fact is only little more than one hundred grams in more than thirty years. The wind was gale force when we got there and as the picture shows the dust was covering the lake bed part of the time. 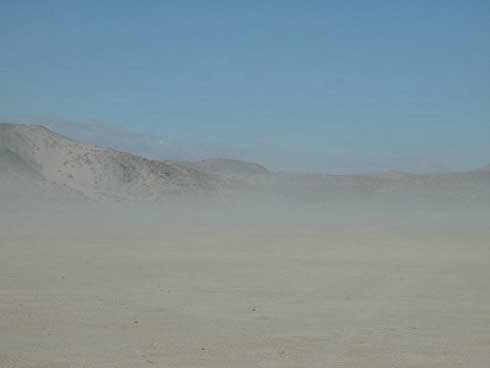 We spent the morning of our first day there hunting and getting a feel for the  lake beds again. Like making some ritual connection again with the spirit of the hunt. We are quite sure that we have discovered why the meteorites at Lucerne are small. It is because they are cut regularly before they can grow up. When we saw this lawnmower out on the lake we simply had to stop and take pictures. 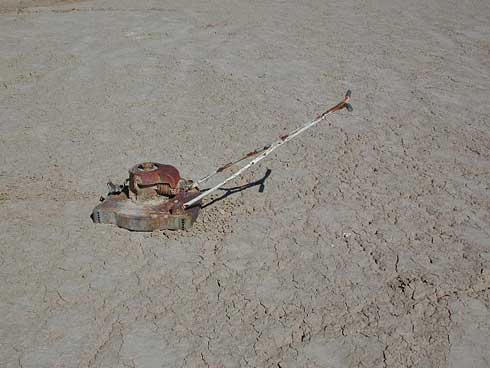 We headed down Highway 247 toward Barstow and without knowing it found ourselves passing the BLM Field Office. I said “Paul I think that is the Old Woman in the window.” We wiped a slow u-turn, (which is the only kind you can safely do in a long motor home) and pulled in the parking lot. We went in with cameras in hand ready to capture this gem of the Mojave for ourselves. Well,I took a picture and then wanted a real close up and to touch it so I tapped on it. The hollow thud was sure proof that it was one of the models. We knew the real one was on display but did not know where. The receptionist told us it was just down the street so we headed off. We loaded up on brochures of the area first which came in handy later. A pair of the photos we took are included and there is an accompanying article just on the Old Woman Meteorite and it home at the Desert Discovery Center. 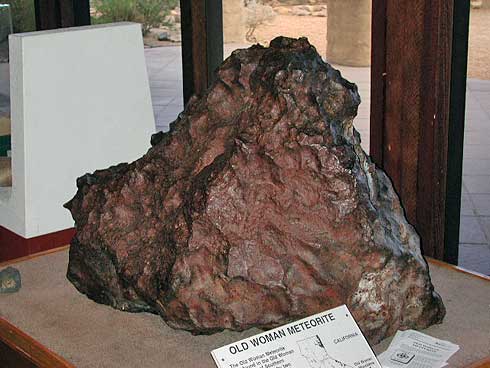 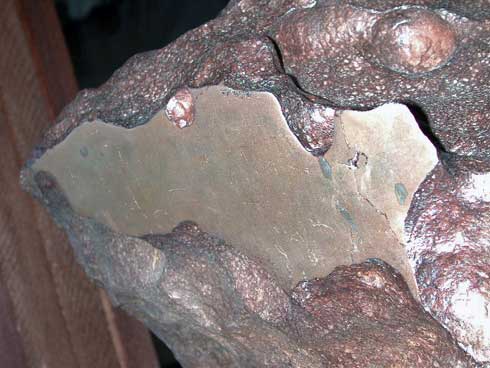 The rain was imminent so we decided to stay in Barstow and drove to the KOA east of town. The only meal we ate out till the end of the trip was at Peggy Sue’s Diner a 50’s theme restaurant, it has been featured on TV several times. After dinner we talked away some hours with my lap top playing with pictures of the Old Woman and the scenes from the day. The rain was intermittently beating on the roof of the motor home, but never very hard and stopped before we went to bed. Looked like we would be able to get out on some dry lakes after all.

During the next several days we hunted meteorites until around one o’clock then ate lunch and headed off hiking to some where else interesting in the area. Some pictures of how we occupied ourselves are included below. 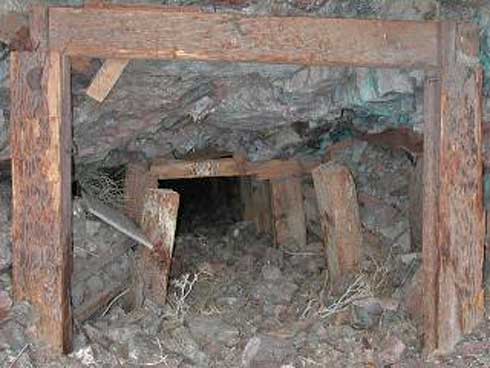 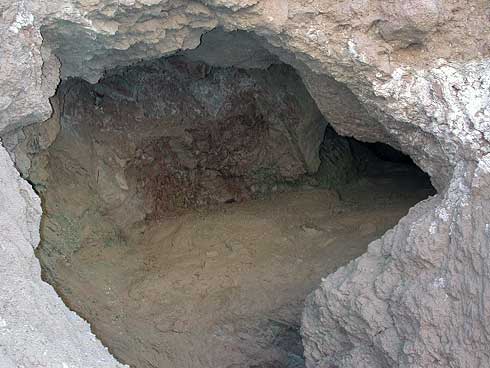 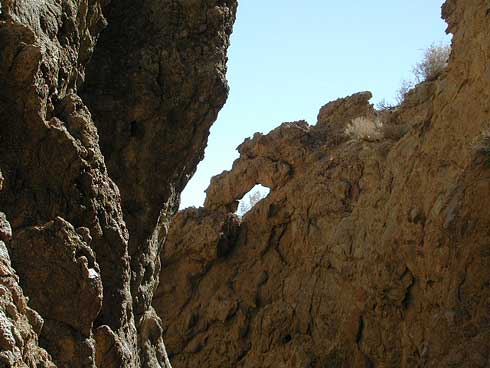 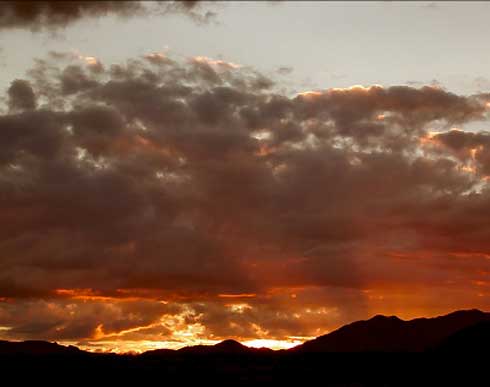 We walked and hiked more than ten miles for sure each day. Some of the lakes had obviously been hunted by others on meteorite quests. It was mildly disconcerting that some of the lakes were clearly posted prohibiting driving of any kind by any type vehicles and yet had deep tire or dry mud tracks next to every black rock. 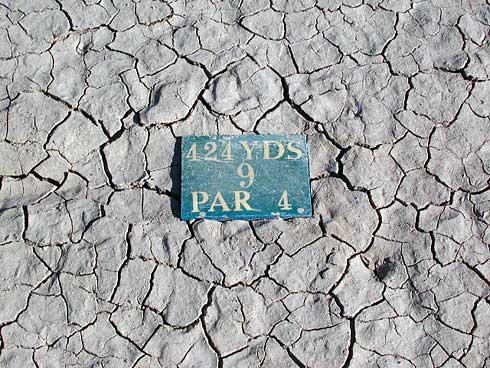 Some other people had found one of the dry lakes to be the perfect location for a golf course as indicated by the sign we found in the lake bed. 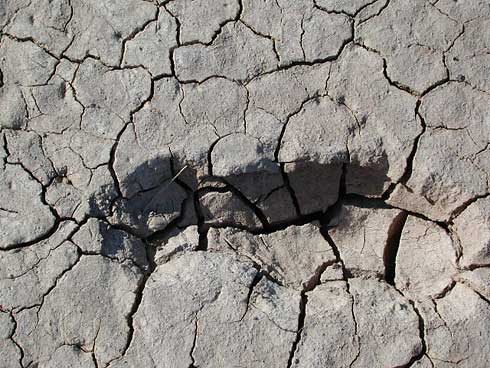 There were footprints in the mud so we knew some of the visitors to the lakes had been there while there was still water or at least mud.

Friday we spent a killer day of hiking in a long and winding rocky canyon. We worked our way all the way up and out the top; where we ate a lunch of beef jerky, a chewy bar, and one of our bottles of Gatorade. 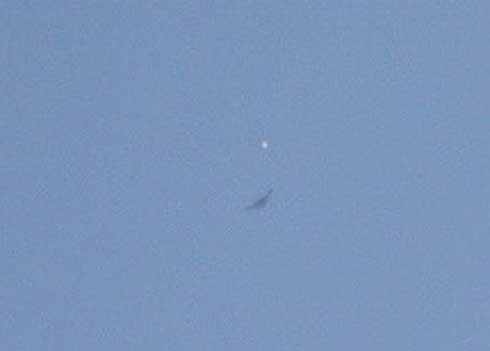 There under a Joshua Tree we heard a double sonic boom and looked up to see a stealth bomber and chase fighter passing right overhead. They passed by and then came streaking back with contrails. 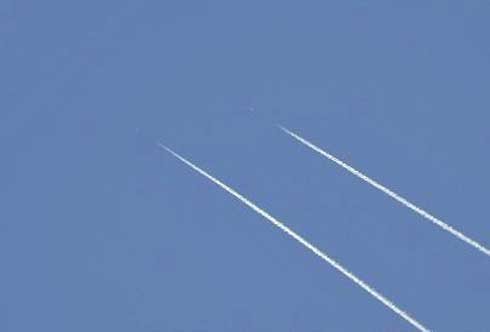 We took matching GPS readings of where we ate lunch and then went off to find a new way back to camp. Up over the side of the mountain and down the other and into one of the canyons that should be about next to our camp. We hiked down into the canyon and about a mile in we ran into drops off of more than ten feet that we were not equipped to negotiate. We hike done ridge over and tried again after another mile or so the same story. We were about three hours from the camp now and had no liquid resources for another bad turn. We had taken a picture in the morning of these birds circling us and made jokes of their ominous meaning, now we thought again. 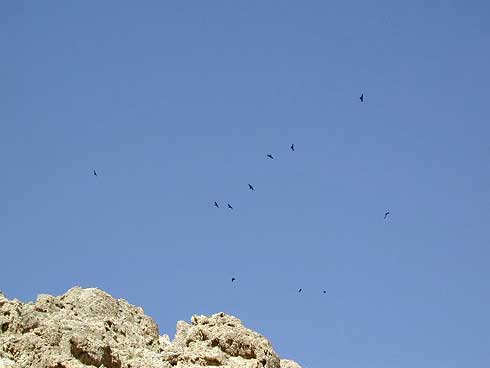 As distasteful as it is for this pair of hikers to have to retrace their path to get out; it was the only wise choice we had. After a swallow of Gatorade we sang the short version of the castaways song from “Gilligan’s Island” altered to the three hour hike lyrics. The extra couple hours of hiking wiped us out so we did not stay up late doing astronomy and astro photography as we had the night before. We were really having fun with our new digital cameras. We took the following pictures of the Moon, Saturn and Jupiter, holding the camera to the eyepiece of a small guide scope that we had brought along. We can’t wait till we get a mounting adapter made to attach them to our real scopes.

The decision of what to do the last day was the hardest. We could spent most of it on a road that we thought from the map was paved but turned out was not. Or we could go an easy hour’s drive to another location and spend most of the day hunting. We chose the latter and as it turned out it was a great decision. About an hour into hunting our reward came as team member Paul found a beautiful perfectly crusted individual.

He had forgotten his magnet cane and came over to use mine. I moved my magnet stick toward him and the stone all but jumped from his hands. I had seen it in his hand and as it jumped the words were already leaving my mouth, “You got one.”

The rest of the day yielded no more specimens but we have a great place to go and look again. The tradition of The Meteorite Exchange is that the one who finds buys dinner on the way home. So it was dinner on Paul this trip, but the tab may be mine next time. 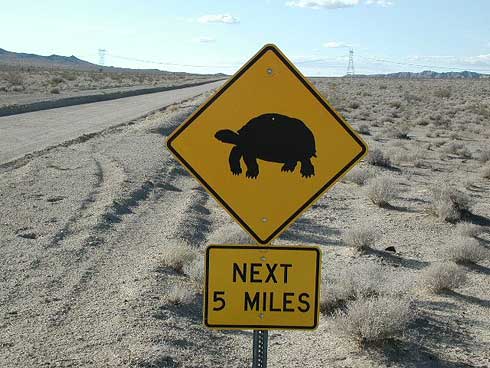 We saw many things that were new and unusual but here is a sign we had not seen before. As always we had a great trip with lots of activities along with hunting for meteorites. We added a long list of stories to tell around the camp fire for years to come.

As it turned out the day before Paul found his I was standing on the side of a mountain and saw at my feet a very meteorite like rock. I picked it up and said that sure could be a fragment of meteorite. So like the well trained hunter I began my normal field identification routine. I got out my diamond file and removed a little corner. Examined the spot with my hand lens and saw no metal grains. I chose not to throw it away however, thinking it was surely the best meteor-wrong I had ever found. Well the months passed and it sat on my dresser. I had never tried a magnet on it trusting the field examination. But, something about it kept calling out meteorite in my mind so finally I did bring a magnet to it and Clack!

The following Saturday I put it in the saw and sliced a end piece off. There they were, both metal grains and chondrules. So next vacation I paid my debt and paid for dinner the first night out. We found more meteorites on that trip but that’s another story.