We would like to thank Meteor Crater Enterprises, Inc., for their generosity in letting us explore Meteor Crater. We need to say at this point that this was a special tour. Tours around the rim and in the crater bottom are not permitted. Also, for scientific reasons collecting of meteorites within an area extending several miles around the crater is illegal and violators are vigorously prosecuted. To preserve the meteorites in situ for future study no more hunting of any kind is allowed. The text and photos may not be reproduced or distributed in any manner without the written permission of both The Meteorite Exchange, Inc. and Meteor Crater Enterprises, Inc. 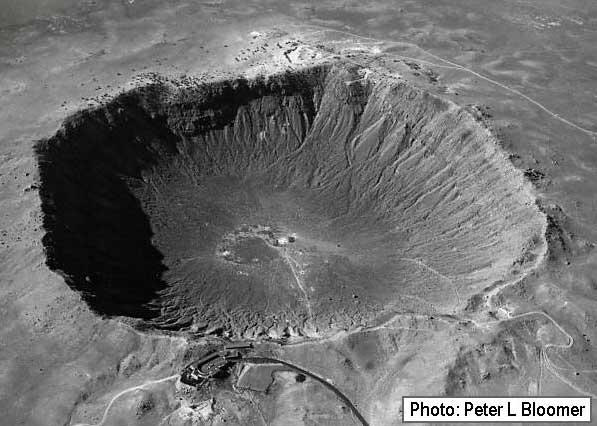 It was overcast and windy as we headed toward the crater a little before nine o-clock in the morning. The wind was a little concern if it increased in speed, but high winds are common at the crater, so we were not really worried that our hike would be canceled. Our guide, Richard, asked if there was anything special that we wanted to see. He was given a list which let him know we were prepared for the day. He said that all the sites were do-able. We chose to start on the east end of the trail.

Climbing back up the slope to the rim we past House Size Rock one of the huge blocks of limestone on the rim.

From here there is a good view of the zigzag trail which was used by horses and mules to reach the bottom and is clearly seen even a hundred years later.

At a point approximately above the zigzag trail on the rim is the remains of the mule powered winch used to move all types of materials in and presumably out of the crater.  For use with it was constructed a wooden slide down the wall of the crater that the materials moved on. From this location one can look out across the south rim of the crater. There are sand dunes in this area. Like this day the wind blows strongly much of the time.

We move along the rim heading toward the site of the South Rim Drill Hole. Here at 1376 feet the drill became stuck fast in what is believed to be a large piece of what remains of the asteroid which created the crater. 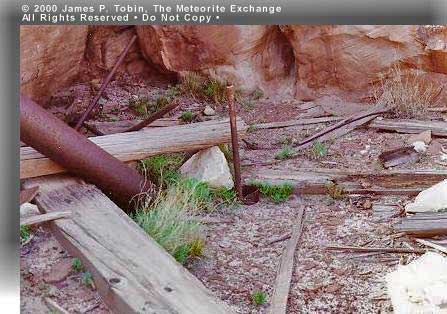 Plagued with problems from the start this drill site created another interesting location at the crater. Best seen from the north rim looking with a telescope or binoculars is the tailing pile and entrance to the horizontal tunnel. Dug into the south wall of the crater to recover lost drill tools it is now a prominent feature as one looks across the crater.

There are many timbers and pieces of half buried machinery and sections of drill rodand casing lying about the south rim site even after seventy years.

From this point on the crater rim it is a good location to see the vertically tilted rocks of the south cliffs.

We leave the very top and edge of the crater rim and head down the slope out toward the plain. After the drill hole on the south rim it was thought that they had finally discovered the location of the buried iron they sought to mine. Our next stop was the site of the great shaftwhich was to be used in removing that iron. It was dug in the slope about 1500 ft from the rim edge and was clearly an enormous effort.

The huge tailing pile from this shaft is clearly visible in aerial shots of the crater as are the large concrete foundations for the equipment.

Around the area are many other small shafts and diggings. This shaft like others was flooded by groundwater. 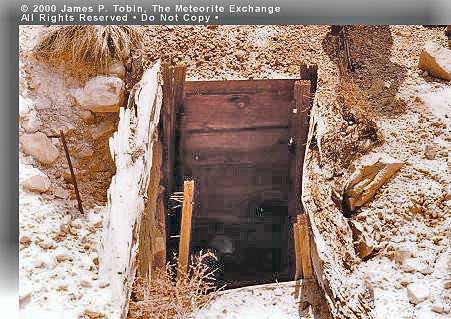 Looking toward the rim from here you can see the next location we were interested in visiting. For a brief period about fifty years ago the silica of the crater was mined for glass making. Two buildings remain in good condition today.

In all only several hundred tons of silica were taken away. Bags for the silica are still piled in the bag housewaiting silently for the workers to return and fill them.

The great white silica pits apparently unable to support growth now that the top soil is gone remain unchanged from the day those workers left.

Moving on around the south rim toward the west we hike past the remains of another building which was in it’s early stages of construction when abandoned. This was to be the school for the children of the workers at the crater.

Soon our hike brings us to the west boulder field, here we find another of the famous rocks. Whale Rockwith its weathered split now resembles the head of a sperm whale rising above the water.

Hiking on brings us to the highest point on the rim of the crater. Named for D. M. Barringer, Barringer Point is a superb location to look at the crater and the surrounding territory.

Canyon Diablo can be seen meandering out to the west. It was there that the water for the work at the crater was obtained. Both water and oil were pumped to tanks on the rim and in the crater bottom. They were used by steam powered equipment. From the north west corner of the crater one can still see long sections of the pipelines.

The pipe was made in a rolled and riveted form and is lighter than pipe used today. A short piece is there for guests to view.

Nearing the end now, the last historic sites on the rim are located where the original museum was located. This like most of the older building in the region was constructed of the native Moenkopi sandstone and is red in color.

As we make our way toward the end of the trail and the present museum building we pass a collection of fossils found in the Kaibab limestone the yellow and orange rocks.

The Kaibab is under the red Moenkopi sandstone and above the gray Coconino sandstone.

We were ready to sit down and have something cool to drink at the snack bar, but we could not leave till we had visited the museumand taken a good look at the displays and specimens.

Meteor Crater is located between Flagstaff and Winslow, in central Arizona, a five minute drive from Interstate 40. Meteor Crater Enterprises, Inc. operates a RV park with a gas station at the exit to the interstate.