Meteor Crater (Barringer Meteorite Crater) formed 50,000 years ago when an asteroid plunged through the Earth’s atmosphere and crashed into what would become central Arizona. Because of the crater’s young age and the dry climate Meteor Crater is the best preserved impact crater on Earth. No humans were living in the region when the impact occurred. The asteroid was small in astronomical terms just a 150 feet (45.7 m) across. Traveling at around 8 miles per second (12.8 kps) the force of the asteroid impact on the ground was tremendous. In just a few seconds millions of tons of rock were flipped over and the great chasm was excavated.

Meteor Crater is 3900 feet (1200m) across. By comparison with craters we find on other bodies in our solar system it is very small. Yet it was formed in an explosion estimated to be equal to 10 million tons of TNT. The mammoths and other giant land creatures of the last ice age could not have guessed what was to happen when they turned to see the blinding light of the asteroid’s approach. Everything was destroyed in the area around the impact for miles. Shock waves moved through the ground like an earthquake for a greater distance. The rocks which had been flat layers before the impact were thrown up to form the rim and shattered. There has been some erosion since the formation of the crater. It has lost around 20 feet (6 m) of it elevation on the rim and the bottom has filled with about 200-250 feet (60-76 m) of rubble and sand. For a very long time immediately after the impact the crater was a lake. There are 90 feet (27 m) of lake deposits on the floor of the crater today.

From a distance the Arizona Meteor Crater looks like nothing more than a low ridge. It is not until one climbs the slope and reaches the top of the rim that the great chasm is revealed. The crater received little interest until 1891 when several investigation were done that single year. The most significant was that of Grove Karl Gilbert the head of the United States Geological Survey. He originally believed that Meteor Crater could have been formed by the impact of an asteroid. The iron meteorites found all around the area made that belief plausible. Gilbert came to the crater with instruments that he trusted could locate the giant buried mass of iron that he thought must still lie underground. When his dip needle instrument showed no indication of a local mass of iron he became convinced that Meteor Crater was formed by a volcanic steam explosion. This mistaken identification would stand for decades even against mounting evidence in favor of an impact origin. The iron meteorites found in the area and on the slope of Meteor Crater were believed to have fallen in a separate event. 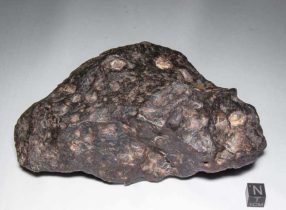 The Canyon Diablo meteorites found around Meteor Crater are iron meteorites of the Coarse Octahedrite type. They are nearly solid nickel-iron metal with some inclusions mostly of graphite. What was discovered quite early was that some of the Canyon Diablo meteorites contained diamonds. Small black crystals of diamond called carbonados had formed in some of the meteorites. But diamonds were only in those that were found on the rim of Meteor Crater. These specimens had suffered the heat and pressure of the impact. A small amount of the graphite had been instantly converted into diamond.

Very little of the original mass of about 150,000 tons survived the impact. Most was vaporized and remains in the soil around Meteor Crater as tiny metal spheroids that condensed out of the vapor cloud. In total just about 30 tons of actual meteorite fragments have been found in the area of Meteor Crater. A great many meteorites were collected after 1886 the year when the first piece was found. The trading post owner near the crater sold over 5 tons of irons to museums all over the world. By the time Barringer arrived in 1904 very few meteorites could be found lying on the surface. Today no hunting for meteorites is permitted near Meteor Crater. So many Canyon Diablo meteorites were found in the 80 years before hunting was stopped that it remains even today a popular specimen in meteorite collections. 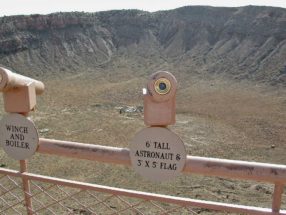 Today Meteor Crater is a famous tourist attraction with a museum featuring displays about the history of the crater and asteroid impact science. Meteor Crater, AZ is also a wonderful laboratory for research by scientists who come from all over the world to study the crater. In order to preserve the site for future generations there is no hiking of the crater rim or interior allowed. However there is a guided hike offered when weather permits that is informative and enjoyable. For those that want to see and experience Meteor Crater in more depth we have online photographic and descriptive walking tours of the rim and floor. The Meteor Crater Rim Tour begins with our guide Richard leading the way and showing the important features and sights along the rim of Meteor Crater. The Meteor Crater Floor Tour begins with a hike down the Astronauts trail and all the fascinating and historical sights from the floor of Meteor Crater. 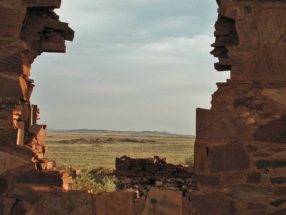 In 1902 Daniel Moreau Barringer is told the story of a great deposit of iron by Samuel Holsinger. Barringer is initially skeptical but sends Holsinger to stake claims on the crater in 1903. On March 15, 1903 Barringer forms the Standard Iron Company in Philadelphia with the intent of locating and mining the buried deposit of nickel-iron. By May the development work on the claims is complete and on December 24 Barringer’s friend Theodore Roosevelt signs the patents on the claims. Barringer has never been to the crater. He has waited and avoided notice for fear that others would jump the claims because he is well known in the Arizona mining industry.

In March of 1904 Barringer and his partner in Standard Iron Company, Benjamin C. Tilghman arrive at the crater for the first time. During that visit they collect many specimens of rock that support an impact origin and they find no volcanic rocks of any type. They collect iron meteorites and find during the digging of trenches masses of weathered iron meteorite that they name Shaleball Meteorites. Barringer is convinced that because the crater has a generally circular shape that the asteroid must have fallen from nearly straight down. Barringer was sure the millions of tons of nickel-iron would be found under the crater floor. Standard Iron Company begins their exploration with a hand dug shaft sunk into the crater center in April of 1904. The material of the floor of Meteor Crater was easy to dig and very soon the shaft reaches 181 feet (55 m) in depth. It was at this point that the men hit quicksand and the shaft was abandoned.

Barringer and Tilghman would turn to drilling holes into the crater floor. By July of 1908 a total of 28 holes had been drilled in the interior of Meteor Crater. During 1905-1906 while the drilling was going on a second attempt to dig a shaft was conducted. The boiler and wench that were used are still at the center of Meteor Crater today. But despite all their efforts this shaft failed also to reach very far beyond the level of the water and quicksand.

In 1911 while Barringer is traveling in Europe the largest specimen of Canyon Diablo meteorite was discovered by Samuel Holsinger. Meteor Crater was not officially named that until 1948. Meteorites are named for the nearest geographical feature. In the earliest years that was Canyon Diablo just to the west of Meteor Crater. When Holsinger died a few months later in August of 1911 Barringer named the 1409 lbs (639 kgs) iron he had found The Holsinger Meteorite. Meteor Crater has often been referred to as Barringer Crater by scientists.

Over the remainder of Daniel Moreau Barringer’s life there would be constant attempts to find something of value he could sell from the crater. Fine silica flour created by the cosmic hammer blow occurs in vast quantities around Meteor Crater. The largest deposit on the south slope was mined for a period after Barringer’s death. But despite many samples being sent to manufacturers during his lifetime none ever lead to a commercial product.

Barringer expended great effort trying to find investors to fund his search for the buried iron. In 1920 he arranged a lease with United States Smelting Refining and Mining Company of Boston. They agreed to spend $75,000 drilling up to ten holes into the rim of Meteor Crater to locate the nickel-iron deposit. Crater Mining Company was formed as a subsidiary of US Smelting in the Spring of 1920. After months of preparation work drilling started with a 10 inch churn drill bit on November 1, 1920. Progress in the drilling was fantastic at first, with the drill reaching 97 feet (29.5 m) in just three days. But soon the creviced and shattered rocks of Meteor Crater would turn the drilling program into a costly nightmare which lasted for two years. Instead of spending $75,000 on up to ten holes the single drill hole cost nearly $200,000. 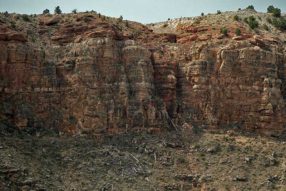 Little evidence of meteoric material was discovered during the drilling on the south rim. Two objects that were nearly as hard as the drill bit were ground through with great difficulty. They were each just a few feet thick and may have been iron meteorite fragments. In the last few feet before the drill became stuck for the last time they had reached an area where weathered meteoritic material was being brought to the surface. But no great mass of millions of tons was ever found. Barringer took the small amount of evidence that the drill had revealed and began an even more costly and futile effort. He started tunneling to the area the drill had found. From a location about 1100 feet (335 m) south of the drill hole out on the slope he began the final shaft. He proposed to dig down to the depth where the drill had encountered the meteoric material. This was over 1300 feet (396 m) and then tunnel horizontally over to the mass. He had long believed that the water which had plagued the previous shafts was confined to the crater. He was to discover that it was not. At around 600 feet (182 m) they hit water again. Larger and larger pumps were obtained and millions of gallons of water were removed. They cemented the walls of the shafts as they descended. The miners struggled down to 700 feet (213 m) with enormous effort. After weeks of more effort they had gained just a few more feet when the pump broke down and the shaft flooded. At a final depth of about 713 feet (217 m) this shaft was also abandoned. It would be the last major attempt to find the buried asteroid.

While the last shaft is being dug science and mathematics are revealing that the asteroid was small and vaporized on impact. The mathematical report of Forest Ray Moulton would be released just days before Barringer’s death on November 30, 1929. Many feel that the shock and distress of that report contributed to his heart attack.

*ppm is the abbreviation for PARTS PER MILLION