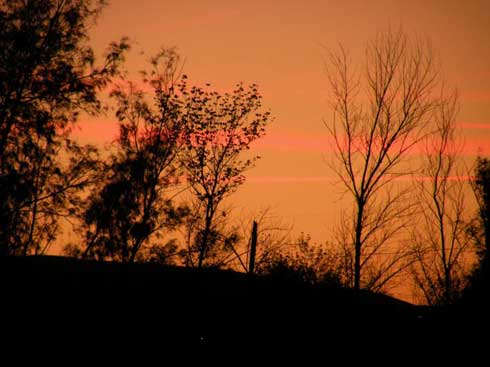 Life has a way of being cyclical. A few years ago I was able to get out of town to the local astronomy hotspot ever new moon weekend. Then I was not able to go at all. For a few years Paul and I were able to go hunting for meteorites regularly, then we were not. It has actually been several years since we took long time than a day for hunting. So we put an out of town message on our meteorites for sale site and away we went.

Well, during the interval that we could not break away to hunt the Franconia strewn field has been found; widely hunted, and to a remarkable extent cleared out of meteorites. There is an old adage often attributed to Nininger that strewnfields are never completely cleaned out. But, Franconia is very close to that point after spending six days there doing a variety of activities including lots of hunting.

We headed out on Friday at about 12 noon and had a pretty easy ride with only occasional heavy traffic to Barstow. We sometimes go only half way and stay the first night in an RV park. Paul worked right up till we headed out so staying the night was the most restful thing. We knew there was a Delta II Rocket launch scheduled for Friday evening so with new cameras in hand we waited to see the glow streak across the western sky. And we think we did however, it was far to the south of where we expected it to be and the loop it made was very short from our location. We took some star picture to experiment with our cameras. I got a little practice with manual focus and locked infinity. The 8 second exposure recorded the stars down further than naked eye so I saw some immediate promise for limited astrophotography. Paul’s new camera with all its features can take as long as a 30 second shot as preset options and has a bulb setting for real time-exposure shots. His experimental shots were likewise very promising.

We started out early for Franconia on Saturday and arrived about 9 AM eager to start hunting. We had plotted the locations of the larger finds. We wanted to start in the southern half since we had the RV and it is not suited to sandy roads. But, knew that in the week we could cover many locations in half day hunting sessions.

The first morning we began in the northern portion of the south half near the intersection of the four main dirt roads. It was only about thirty or fourth-five minute until I had a very strong sharp signal. There was nothing meteorite looking in the desert pavement. So I dug a little and stuck in the telescoping magnet. Sort of like pulling out a plum in the old nursery rhyme I had a nice iron. I photographed the location and recorded the GPS information. And we moved on hunting that area all day. The Franconia area has had a rich past of military use the ground is loaded so to speak with spent ammo. It does not take long with a detector to recognize the signature of a 50 caliber bullet. Some are buried as deep as seven to 10 inches. There is iron wire everywhere which one also quickly gets used to hearing. Though to be safe and not miss a Franconia iron one needs to scratch through the target area with a magnet if you have any question in your mind about the signal from the detector.

Franconia has been hunted so well with such good equipment finding another meteorite is a real challenge. On the afternoon of our second day we ran into John Wolfe. We introduced ourselves and ended up staying in the same spot off the road. Bob Verish was coming out that evening to spend some time in the area. We set up Paul’s new telescope and my mechanical motor drive tracker for some astronomy and astro photography. This was really the first opportunity he has had to use the new scope. We had a great night of observing and I got a few pictures. Bob got out there in the early evening and we all sat down for a fried chicken dinner. After catching up a while with Bob during the astronomy I set out with my UV flash light to find some fluorescent rocks. The ground at night is covered with calcite covered rocks all of which glow bright orange. I told Paul that I would keep my rock hounding under control and not bring back more than 1000 pounds of rocks.

Even if we can not find meteorites we always have other stuff we enjoy doing. Late in the evening we called it quits and turned in to rest up for another day of fun in Franconia. John and Bob enjoyed the astronomy and tomorrow we would try to make use of a little of John’s wisdom in finding L chondrites that are still out there hiding. John had been finding a few of the little L stones. We hunted hard all day did not return to the RV for lunch even and found none. Another evening of astronomy followed. Just as we were setting up Bob while walking down to get his car which he left down the way found a Franconia H stone. But, even this one was not so much a find as a fluke. Sitting next to a pockmark where a meteorite had been was the piece Bob found. It had a broken but desert varnished edge. The original finder had taken the larger piece and never swept back over the hole to check for more. An easy beginners mistake from which Bob benefited.

Tuesday morning of our vacation we hunted down in the north west portion of the south side. Then at noon we headed off for Kingman to the KOA. We had arranged to meet up with Mike Miller and take him to dinner and have some hot food and a hot shower. Take a break, watch a movie relax for the evening and then come back refreshed for more hunting. It was a great evening of stories and joking with Mike. He gave just some advise about where there might be a few chondrite stones remaining at Franconia in the north half of the strewnfield. He let us know about the condition of the road a little and as it would turn out we chose to hike in a long ways rather than risk going down the road as far a he had said. From the selection of movies we had brought we chose Red Planet. It was nice to have full hook up and all the power and water we wanted to use.

Up early we eat a fast breakfast and drove back down to Franconia. Armed with the advise of Mike Miller we determined to hit the north side of the strewn field hard for the remainder of our time. We got up on top of the old alluvial surface and searched the area staying pretty near the wash as Mike had said. Soon Paul found a nice chondrite resting in the tight packed pavement of regular stones. Not long after he found another smaller one, and just a little later a third sort of middle sized. I did not find anything and it was beginning to look like for me I would get skunked out on the north side.

We were so far from the RV we did not even think about returning there for lunch and hunted straight through till late afternoon. We always carry a big load of liquid and some granola type bars to sustain ourselves so it was OK to be out all day. The weather all trip was wonderful. Hot but not as hot was we have hunted in sometimes. 90 to 95 degrees is what we had every day. As we returned to the RV we looked at where it was in relation to where we were hunting and we could easily see that we could drive much closer for hunting the next day.

Thursday would be our last day at Franconia. We decided since Paul was having some luck to go back and hunt again in the same area Mike had directed us to. Nothing but ammo and wire all morning for me, then around noon I got a good hit that I knew was iron but not wire. I had lost my telescoping magnet on the first day and had torn apart another thing with magnets in it to get them out so I could use them to hunt the dirt. I ran the magnet thing I made through the dirt and stuck to it was a small iron meteorite. I recorded the location and moved on. In about thirty seconds I got another hit less than ten feet away; again a nice piece of the Franconia area iron. They were not very big but typical I guess for what is found the one was really cute like a smashed droplet. It was nice that we had both found a few pieces where Mike had sent us. Kind of funny Paul found three stones on the trip and I found three irons. 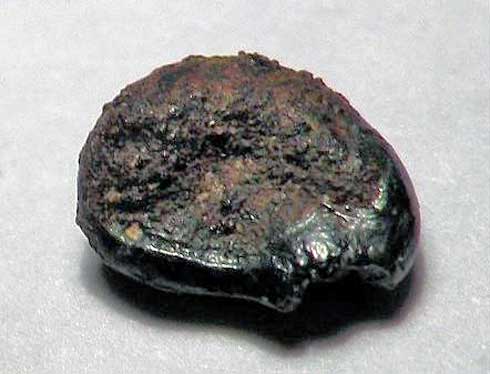 Are there still meteorites out at Franconia? Well, the answer is yes. Can they be found is really a different issue. You have to work really hard now. I am impressed by the systematic and diligent manner that Franconia strewn field has been cleared of meteorites. Many of the areas have been grid hunted leaving nothing unchecked. I know with our detectors we did not miss any meteorites we swept over. They literally find all metal in the ground. There is not very much left at this point on the old pavement surfaces. There are probably meteorites in the sandy washes buried. There are still the L chondrites being found occasionally. But, it is hard to find meteorites there now. In fact Gold Basin is from everything we heard still producing far more stones to the diligent hunter.

We had a great trip, no injuries, no snakes seen, found a few meteorites and got some good time away from work. Great memories. Here is a final picture. Can you find the horned lizard in the shot? He stood still for me to get several pictures. The extended telephoto on my new Nikon made getting the shot easy without approaching down close and scaring him. 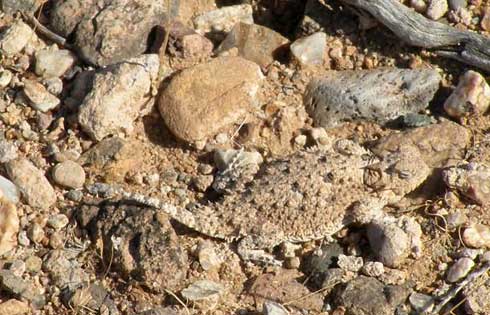 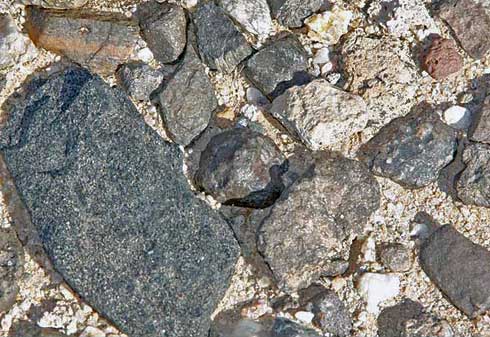