Every month one of the questions that we ask of the individual that will be Meteorite Person of the Month is do you collect any related rocks like impact breccias, and crater glasses. This month I thought I would share a few items from my collection of crater materials.

Geological processes on the Earth in a relatively short time will remove much of the topographic evidence of impacts. The rims will wear down and the craters will fill. Eventually, nothing save the tale tell magnetic and gravity signatures of impact will remain. But, the rocks at the impact sites May preserve the story in shatter, shock and melt for a very long time.

As we look out at the other bodies in our solar system we see everywhere the scars of thousands of impacts. Our world has certainly been hit as well. The list of impact sites on Earth is growing longer and longer. Since the Earth is an geologically active world with a vast history of reworking and remelting there is a wide variety of rocks. This makes for wonderful possibilities in what will become breccias and melts from impact events. It can make for a very colorful collection as well.

When an asteroid hit the ground it pulverizes the native rocks as it dives downward. A tremendous explosion occurs an instant later as all the energy is released. Rocks are melted underground and the rock layers over the point of the explosion are lifted, flipped over, and thrown up. The rocks are now shattered into little angular bits. This is a requirement of the definition for a breccia. Breccias are rocks which are made from the angular pieces of one or more types of earlier formed rocks that have been broken . The breaking need not be impact related it can be other mechanical breaking processes. But it often takes time for the breccias to become a new rock they need to have their separate fragments “cemented” together. Sometimes it could actually be a cementation process. Other times it May be the filling of voids and spaces with siliceous material deposited by water moving through the pore spaces. But, with impact breccias there is tremendous heat, and melting that play an important role in the formation of these breccias. Often impact breccias will produce a tinkling sound when tapped because of the glass they contain. They May be swirled through with this glass or it May be in clumps. Some of the material found at craters is totally melted glassy rock. These are impact melts rather than breccias.

The first example pictured is of Koeffelsite. It is not breccia but melt. It always reminds me of marble cake. It is very light. I have many pieces that will float. It has a pumice appearance and feel. It is also layered and in this respect very reminiscent of frothy Muong Nong tektites. The slice pictured is slightly over one inch thick, four inches tall and two and one half inches wide. Ignoring the rough edge contours and using these figures it has a volume of 163.87 cubic centimeters after conversion. It weighs 121.224 grams. Its specific gravity is therefore well under that of water. In fact it is .74 grams per cubic centimeter and would float were it not for the porosity. It immediately acts like a sponge and sinks like the stone it is. But, when sealed in a plastic baggy it floats. Koeffel was long debated as an impact site, but now seems to be settled as being one. 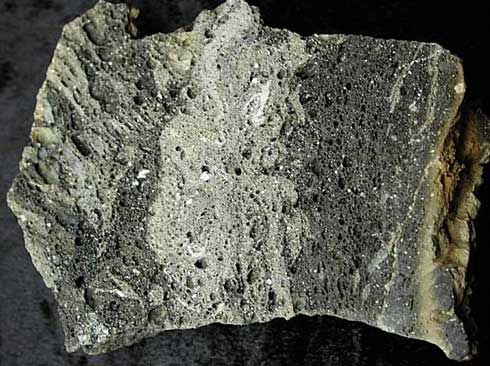 Where the previous specimen was a very light and fluffy melt. The next is very dense and solid. It is a piece of breccia from Lappajärvi, Finland. It was a large cobble stone that has been sliced. There are areas of swirling glass and several different rocks are incorporated in the stone. There are large chunks of rock and very small fragments also. The areas of tiny bits are sometimes called microbreccia. It certainly demonstrates that there is little sorting of the material in impact breccias as occurs in some other rock forming processes. 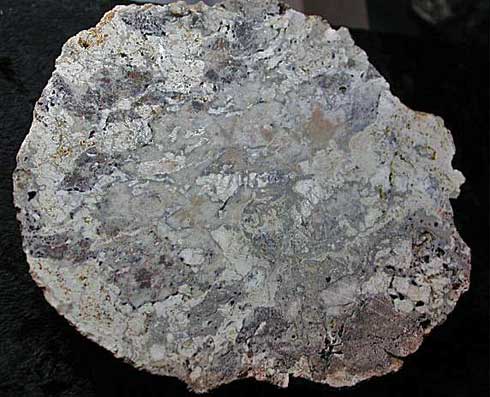 The next offering is red impact rock from Ries Crater, Germany. It is a very attractive looking breccia mostly red matrix with fragments of several other colored rocks enclosed . There is some glass which is quite porous. Often the glass is black in color. There May also be crystal encrusted vesicles in the rock. One of these can be seen in the middle area of the photo. The swirling in the rock is not as visible because of the more uniform color of the red matrix but it is there if you look carefully. 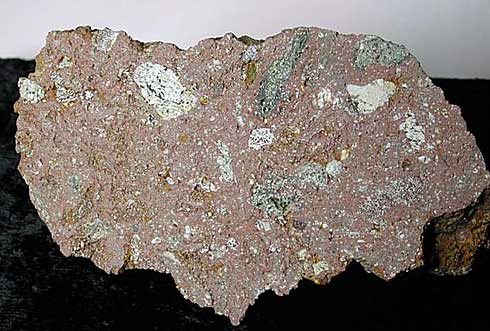 The last specimen this month is from the Kara impact in the Northern Ural region of Russia. The area in the upper right of the photograph is light in color and shows swirling, with lots of glass. In the dark area surrounding there is a very different appearance. There is no visible glass, no swirling of the material and there is a distinct difference in the color of the rock that forms this area. There is none of the black rock in the previous region and it is abundant in this area. It appears to this author that a mass of mixed up once fluid material attached itself to a breccia that was not nearly as heat altered. The boundary between the two regions is also rather sharply defined. 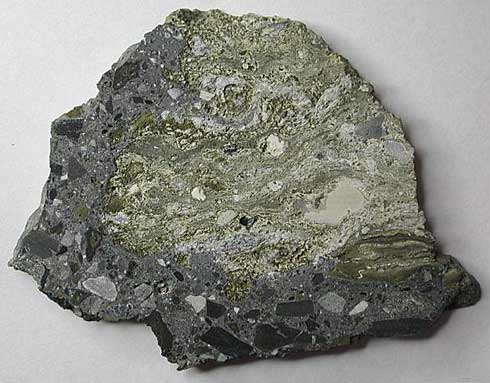 There are many other types of rocks that relate to impacts besides breccias. All are fascinating and offer the collector hours of enjoyment and study.