Vacation to the Alamo, Breccia that is

It seems the last couple years whenever we head out of town the weather is rainy. But, we knew we were going a long ways and that there was a great chance that we would pass right through any bad weather and emerge to clear skies. We flirted with rain all the way out of town. Near sunset we had nothing but rainbows to look at. 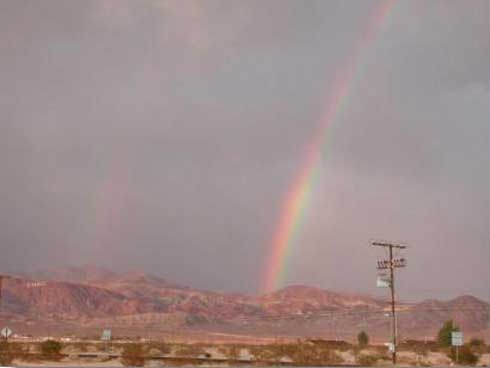 We spend the first evening at our traditional RV Park and got up early to head for the Alamo Breccia.

Over much of Nevada lay a sea in Devonian times. Beds of limestone up to 4000 feet in thickness are found in eastern Nevada. The region just west of where the small cities of Alamo, Ash Springs, and Crystal Springs are today was part of that sea and the location of a colossal impact. The extraterrestrial visitor plunged into the sea and passed deep into the strata below. The crater that formed has spent the long ages since eroding until only spotty traces remain. It was to one of these locations that we journeyed. As we drove along we saw thick layers of rock in many of the mesas. The harder rocks forming vertical cliffs and the softer ones looked like flat topped steps. Our destination on the first day was Hancock Summit and a breccia site just down the road. We kept our eyes out for that thick layer of dark gray rock that was our goal. 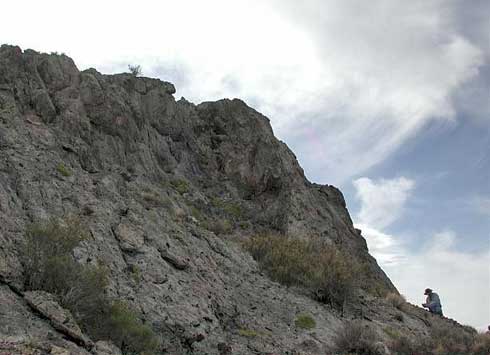 We pulled down the short dirt road and parked, glad to be there. Glad it was still early. We had all day to hike and explore. The Alamo Breccia runs up the front slope of the lowest of a series of peaks that become progressively higher. Out on the west end of the ridge the Alamo Breccia stands up in defiance as a strong projection of rock. Reaching that high point was our ultimate objective, but we began by climbing the full length of the layer starting at the bottom end near the road. Near the foot of the mountain the exposure of rock shows little evidence of the breciation. But, as we climbed the characteristic dark and light spotty appearance became the norm. There are large blocks of rock that are intact mixed with the rest that are the breccia. We soon began to see fossil fragments in the rocks. Shells of gastropods and brachiopods, corals and others all mixed into the rubble that has reformed into the Alamo Breccia.

We had no desire to remove any of these in situ fossils, but just to photograph them. We hoped that among the huge amount of material that has weathered off we could find representative pieces to bring home. In the main I think we were successful. I do not think we got any really nice clusters of coral, but we made some nice finds. For me it was finding the pretty brachiopod that was the high point. At least as far as fossils goes. The rock that these fossils were originally in is not necessarily the rock or even the age of rock that they are in now. However, I believe  the simplest identification option  is probably the correct one for this brachiopod. The guide fossil in the local faunal zone of the Upper Devonian is a fat little spirifer, Theodossia that was common in the Cordilleran sea. I don’t see anything about the fossil to make me doubt that is it. 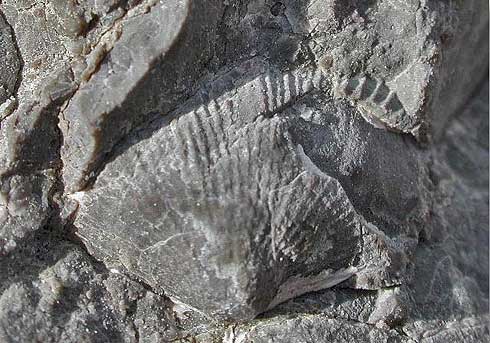 Some of the other fossils we found or photographed are shown here. And all the small pictures are thumb nailed in this article, so click them to see the wonderful detail of the fossils and specimens. 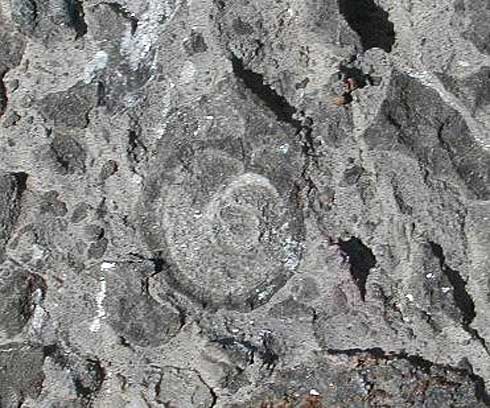 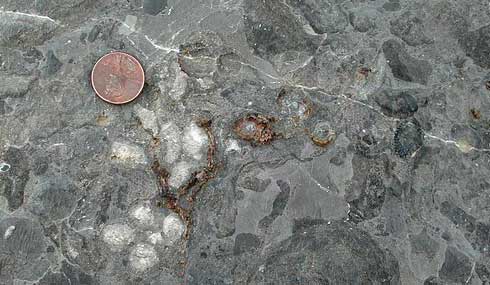 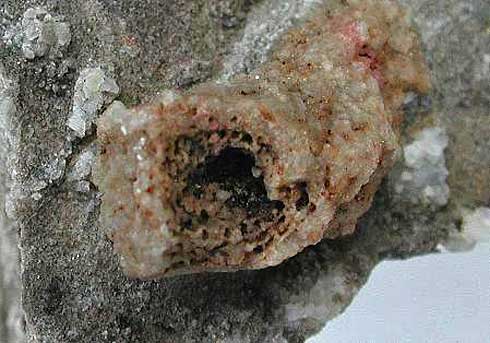 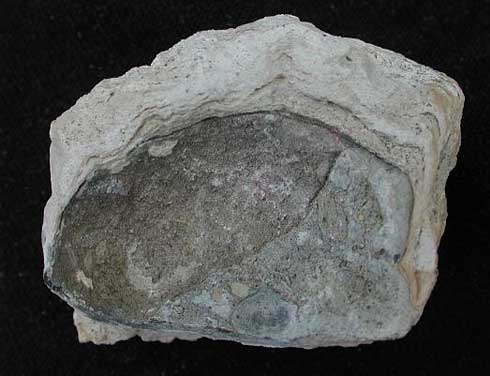 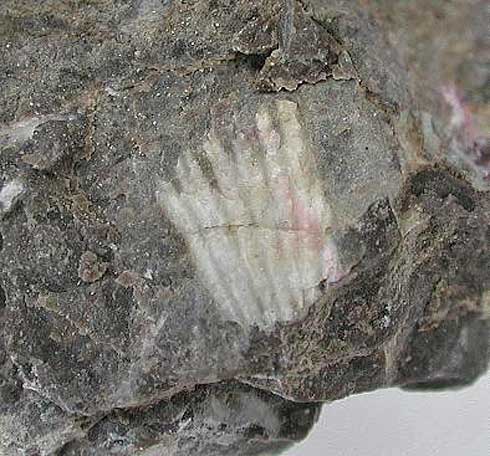 We brought back some nice specimens of the breccia also. Yes, I am going to talk about the impact rocks finally. In general the rocks from the Hancock Summit site are gray with a variety of different colored broken clasts making up the mass. However the various colors are mostly other shades of gray from very light to nearly black. 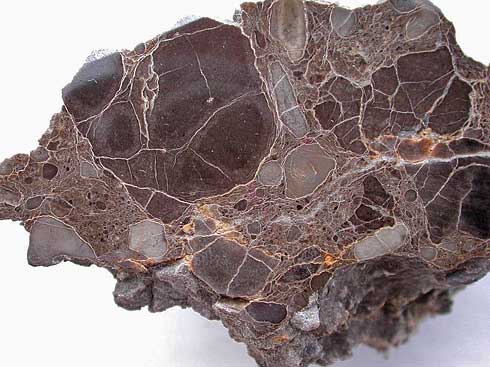 Occasionally, we did find a chunk of a banded cherty rock of orange or red incorporated into the mass. That was always a treat. I have not as of this writing had a lot of time to work with the material but I have cut and polished a few pieces. 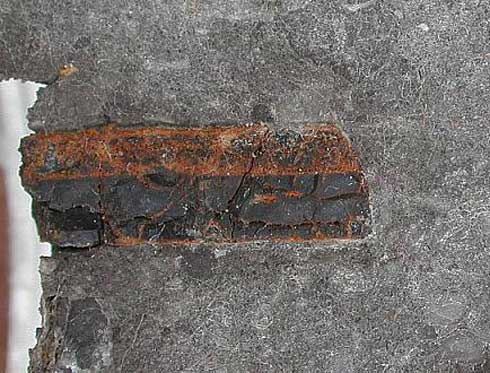 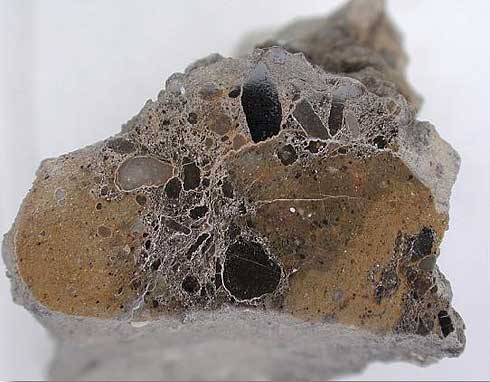 We returned to the site a couple days later to re-investigate some areas more completely. During that visit I was standing on the top of the knoll on the end of the Alamo Breccia looking across the small valley. There was an outcrop of rock there that was very similar in appearance. I traced the layer there back toward us and became convinced that it was more Alamo Breccia. It simply disappeared for a space as the underground portion of a syncline, reemerging as the thick band running across the hill on the other side. 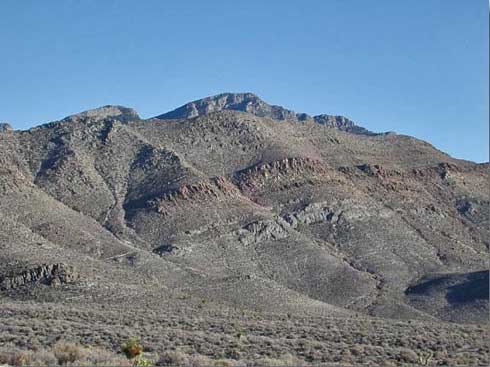 We were pretty tired and it was well into the afternoon. But, this intrigued Paul I think too. No mention had been made in preparing for the trip that there was another locality. We dropped our packs at a big rock. I marked a waypoint on the GPS just in case and we hiked over to the other outcropping with collection bags only. We were not very far up the ridge before we began seeing breccia. It was similar but more crystalline and as we arrived at the first of the exposures we noted that it had a lot more fossils. A lot of coral and gastropod shells could be seen. We collected just a few pieces. I took waypoints at those sites and we headed back to the packs. We had gone now all the way over and around the original mountain, down the backside to the bottom of the valley. As well as up and back to the other exposure. It was still a long hike with our load back to the RV. But we were pretty happy explorers.

From where we stood on the top of the Alamo Breccia we could see the edge of the Area 51 property. We watched cars going down Groom Lake Road all day, long trails of dust made them less than inconspicuous. But, the only really strange occurrence was the incredibly loud double sonic boon that nearly knocked us off the mountain. I was in mid step climbing up the front of a large boulder when it hit. I almost lost my footing; it was as if someone had fired a shotgun off next to me. We looked but could not see the plane. It gave us something to think about as we drove back to the Little A’Le’Inn. We decided to skip cooking dinner and to try the food there the second night. It was a delight and the cold beer tasted really refreshing after all the dust of the day. Rachel, Nevada is a very small town. Clearly they delight in the notion of being located at the interstellar crossroads of extraterrestrial travel. There is alien visitor stuff everywhere. We were lucky enough to catch some photos of one of their craft as it was hovering nearby. 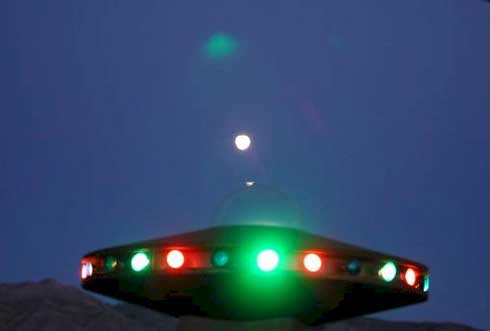 We spent the last day hunting meteorites. You knew that was coming if you have followed us for very long. We chose a nice piece of desert and took the metal detectors for about five hours hunting. We did not find any meteorites but did find some bullets and other things.

It was another stupendous vacation, we learned a lot and explored a lot and brought back some treasures. What more can one ask for? We got some rest and we worked hard too. Can’t wait for the next one, but we hope for some short trips before than. 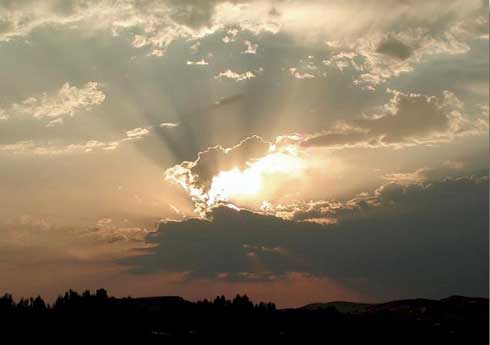